Reports of dog bites are a common occurrence online and in the news, and whenever a new one appears a wave of hysteria spreads, much to the concern of most responsible canine professionals. The news reports these incidents as being the nature of a certain breed, or that the dog attacked “out of the blue”, when in reality we know that this just isn’t the case.

So why do dogs just snap and change from Dr. Jekyll to Mr. Hyde? The answer is simple; they don’t. Dogs are fantastic communicators, and use their body language to let us humans know their stress levels and how they are feeling. The problem is that more often than now, we as owners and handlers are more often than not unaware of these signals.

So what causes dog bites?

A dog bite can occur for many reasons, including:

This list is just an example, and there are more situations where stress levels or excitement may lead to biting. The point is that dogs just do not bite for no reason and there are always warnings signs before a bite occurs. These signs can be very subtle and difficult to spot for an untrained eye. Sometimes these warning signs may have been reoccurring for months or even years before the dog finally loses their tolerance and acts out.

The majority of dog owners/handlers notice some of the more obvious stress signals such as a tail tucked between the legs, cowering or whining, but may not be aware of the more subtle indicators that suggest a dog may be stressed or anxious. 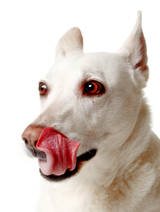 Displacement behaviours are normal dog behaviours that are being displayed out of the dog’s normal context. For example, a normal behaviour in context would be a dog yawning after having just awoken from a nap. In contrast a dog that is yawning while being hugged could be considered a behaviour not in context and therefore a displacement behaviour.
These behaviours indicate a conflict and anxiety in the dog. The dog wants to do one thing (act out) but suppresses the urge and displaces it with an alternative behaviour (yawn). The behaviours are a sign of this conflict and a warning sign to all owners/handlers.

Other examples of displacement behaviours can  include:

Dogs are not silly beings, if they are in a situation that is stressful or makes them feel anxious they will want to remove themselves from it. Forcing a dog to stay in a situation in which they feel anxious is a recipe for disaster, especially if you are not a professional. There are some cases where forcing a dog to remain in a position they feel uncomfortable in is necessary, but should only ever be under the instruction and supervision of a canine professional. Avoidance behaviours are much easier to spot, but they still may go unnoticed as an early warning sign.

Some examples of avoidance behaviours can include: 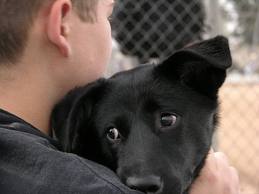 Some more of the more commonly known warning signs are:

(Be aware that signs shown by tails is whole other article in itself and the signs shown by them will differ greatly between breeds. Do not rely only on the visual cues of the tail)

Dogs in general do not like being hugged around the neck or being climbed over by children and these warning signs are a dog’s silent cry for help before acting out. Be vigilant and observant of your dog’s behaviour and not only could you save somebody receiving a bite, you may save the dog from the needless act of being destroyed.

Here is an amazingly well produced short video created by ‘The Family Dog’ that expresses the cries for help shown by our dogs put under unnecessary stress by young children.

If you are noticing some of these behaviours this is a situation where you need to call professional immediately, do not wait for the unspeakable to happen.