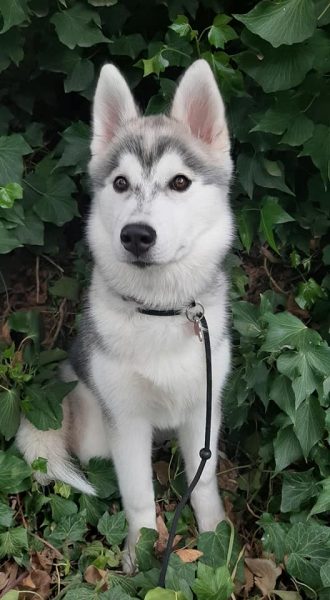 Mya In her first session, Mya focused on further developing her skill loose lead walking around the pet retreat facility. Mya was initially excited and struggled to engage with her trainer, this caused her to pull on the lead. As the session progressed Mya began to relax and redirect her focus onto the trainer. Once engaged she performed well, she can easily become distracted by the environment but overall performed well. In her second session, Mya focused on further developing her skill place with distance. Mya responds well to the place command, jumping onto the bed. She also performs well with her duration, to challenge her the trainer began to create distance. Initially, she struggled and broke place. But with some guidance, she quickly began to maintain it well. She successfully remained on the bed while the trained walked around the classroom. In her final session, Mya focused on further developing her skill drop with duration. Mya follows a lure well into the drop position, she does struggle to hold duration. To start building her duration the trainer used a high reinforcement schedule (treat every 2 seconds) to encourage her to remain in drop. This was slowly increased as the session progressed. Willow In her first session, Willow focused on conditioning the classroom environment and trainers. Willow initially showed nervous behaviours towards the trainers and the classroom, with some time, patients and treats she began to warm up. In her second session, Willow focused on conditioning her reward market 'yes' and learning the new skill place. Willow continued to be unfocused and overwhelmed by the classroom environment. To help her relax the trainer begin to condition her release work 'yes'. After several repetitions, she slowly began to relax. She continued to show little engagement with her trainer but would follow a lure onto the place. In her final session, Willow focused on learning the new skill set, within the classroom. Willow was distracted during this session and would not follow a lure, the trainer tried different motivators and discovered she likes toys. Utilizing the toy as the reward Willow began to go into theist position. Melo In his first session, Melo focused on learning the new skill drop within the high distracting environment (2 dogs training nearby). Melo followed a lure into drop well but struggled with duration. Melo progressed well throughout the session, showing good progress. In his second session, Melo focused on learning the new skill place within the classroom. Melo performed well, he followed a lure quickly onto the bed, the trailer used his reward marker, Yes to encourage him to remain on the bed. This helped Melo quickly build duration with this skill. In his final session, Melo focused on learning the new skill of loose lead walking. Melo was initially excited and displayed challenging behaviours of pulling on the lead. As the session progress, he began to relax and redirect his focus onto the trainer. As he was performing well inside the classroom the trainer challenged him with walking outside. He was initially distracted but redirected his quickly. Molly In her first session, Molly focused on conditioning to the sound of the spoon inside a mug while in drop. Molly performed well, she did not react to the sound at all, she successfully remained in drop and ignored the sound. In her second session, Molly focused on further developing her skill touch within the high distracting classroom. Molly was overwhelmed by the environment and struggled to engage with her trainer. As the session progressed she began to redirect her focus and perform well. Molly responds well to the touch cue, moving to the target stick. In her final session Molly focused on building her confidence around new and challenging objects, these include small and big hula hoop and a tunnel. The trainer began using a large hula hoop. Molly followed a lure and walked straight though the hoop. The trainer was very impressed, challenging her further with a smaller hula hoop. Once again she followed a lure though the hoop quickly. As she was progressing so well the trainer challenged her further with walking though a small tunnel. Molly performed amazingly, following treats into the tunnel.

It was a PLEASURE training with your pooch today and we look forward to continuing to help you achieve your goals, skills and improve your relationship.

Your journey does not end here, it has only just begun!

"I trained hard, I played hard! Please find below the skills we worked on and my results. I look forward to showing you what I learnt and working on them more with you!" If you have any questions about the skills we trained please feel free to contact todays trainer."

We recommend your next step should be…

X: Not gradable, the focus was on Enrichment, Socialisation & Engagement.